WE ACCEPT CREDIT CARD PAYMENT VIA:

PLEASE CONTACT US FIRST REGARDING SHIPPING. THEN SIMPLY CLICK ON THE PAYPAL LOGO TO START YOUR PURCHASE!

LOLA, AN OLD-FASHIONED GIRL IN A NEW-FASHIONED FILM 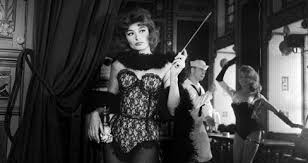 Today we’re looking at a movie more than fifty years old, and as fresh as the day it was introduced in 1961. The fact that it has vanished from view as far as the world at large is concerned, lends to this fond retrieval something special.

Among those few who have ever seen it (truth to tell, it was largely ignored even in 1961), the consensus is that a very young Jacques Demy infuses this, his first, film with loads of old-fashioned charm and just a soupcon of New Wave skepticism. It does concentrate on the vicissitudes of love amongst very likeable characters. But Lola is a film with loads of skepticism and the rare charm of caring for integrity, which is to say caring for the quality of one’s motion.

Lola is a taxi dancer at the El Dorado Club in the Loire city of Nantes. She dreams that the guy who abandoned her and her son will come back to Nantes.

He does. She’s pleased. But her shabby dancing is just a symptom of her lacking graces which others in the story make an effort to attain.